Between Here And Kansas

I didn't see Dorothy or Toto when I got to Kansas, but before I left Missouri I saw this udderly surprising sight:

We were going to take a whole meal to Heather's grandparents today. They always do the cooking and put on a epic feast this past Thanksgiving. On Christmas Day they'd had a full day of family and we expected they'd we worn out. It seemed like an opportunity for Heather to shine, which she did.

While she was making the chili, cornbread, and brownies I took the opportunity to spray Billie down with ACF-50.


Last year I bought a pair of Tusk handlebar mittens. They didn't work. I, also, tried a pair of Hippohands. But, because of the way my windscreen is installed they didn't fit either. The folks at Hippohands were wonderful to deal with and allowed me to return them. I hope that my next scooter/bike will be able to have Hippohands. They are really a great product. Anyway, I had these Tusk mittens lying around just taking up space. I've been wondering how much wind comes in under the Symba's windscreen and decided to take a shoelace and some duct tape and cobble up a windbreak to see if it makes any difference.


Of course, I then had to go for a ride to make sure it didn't all come flying in my face in the rain and dark I suspect I may be riding to work in tomorrow morning. It didn't fly off. I think it made a difference, but it really was too soon to tell. Stay tuned.

While I was out I saw this fellow.

And, yes the dinner was a big hit and we had a wonderful visit.

A year ago today it looked and felt much different than it does today. 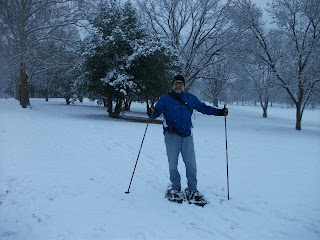 we were out in hunt of pomegranate molasses and some last minute stuff. 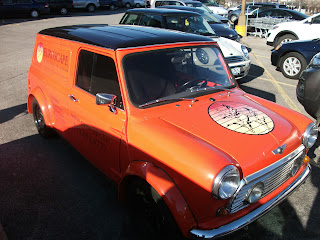 We found the new special ingredient for a as of yet untried chicken recipe, but  we never did find the Christmas card with sock puppets folded up inside. Heather swears she saw these in a large retail store near our condo. Oh well, we will survive the heartbreak.

Billie is parked and secure in her spot in the garage and will probably not to stir again until early Tuesday morning. No Christmas ride is planned. It looks like there will be too many people things that must be attended to.

The days are becoming shorter. Christmas will soon be past and the last Hanukkah candles will have given up the smoke. I wish you all joy, well being, and peace . . . especially peace.

I introduce you to our new mobile sacristy.


I posted this over at Did He Ride Today?, but decided I'd share it here as well.

Back in October the Rock and Roll Marathon Tour* visited St. Louis. At the time I thought it could be interesting to trace the race route while riding Billie, my SYM Symba. I down loaded the course map, but didn't get around to trying it until yesterday. Oh well, I guess it is good to be busy.

Following the race course turned out to be much more difficult than I thought it would be. Some of the streets were one way going the wrong way for me to ride on. There were left turns where no left turns were allowed. And, especially, in the Downtown section of the course I had trouble remembering all the turns and found myself stopping to look at the map again and again. It was rather slow going. I suppose if I had a GPS I could have programed in the course and had a voice telling me where to go, but I don't have a GPS and I already seem to have enough people willing to tell me where to go.

I'm sad to report that Billie failed to finish her first marathon. I didn't allow enough time to figure out the course, and we ran out of time.


But today we were back at it. Being more familiar with the course and having figured out ways around the wrong way streets and no left turns we managed a nice 27 mile urban ride. The course took me by a number of my favorite parks, by one park I'm not so familiar with, and down a couple of streets I'd not been on before. Overall the experience was positive albeit frustrating at times. Truthfully, it was enjoyable enough that I'm hoping they change the course for next year. The website says the map is coming soon.

Today I had more time to take some pictures.


The course took me through the Bevo Mill Neighborhood. 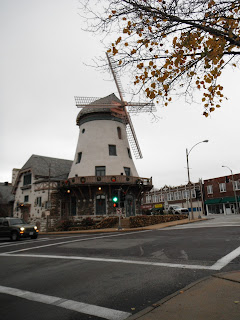 I even got to ride by one of the historic water towers and the old reservoir.


And, I even managed to find a couple of flamingos. 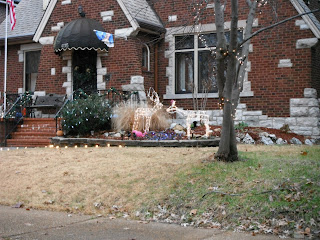 It was dark by the time I pulled up to the garage door.

*click on the highlighted areas for more information.
Posted by Keith - Circle Blue at 5:41 PM 14 comments:

Gary France over at Flies in your Teeth  posed the question, "How and Why did you get into motorbikes?" And, he asked for responses. I have written about this before, but I suspect it won't hurt to revisit the story one more time.
Once upon a time I drove to work everyday. It was the way of things. I drove everywhere. I've always loved driving. I will drive just to drive -- drive and look. Of course, I am an apple that didn't fall from the tree in this regard. When I was growing up my Dad would take the whole family on "rides". We would be gone for hours just riding around and looking.

Downtown I saw bicyclists commuting to work in all sorts of weather. I admired them for their dedication, but also for doing their small part to decrease our dependency on oil. My knees and bicycles don't mix very well or I might have tried to follow their example.
After one of my knee surgeries the surgeon suggested I start inline skating. At first I thought he was joking. Next, I thought he was just insuring his offspring had money for college. Eventually, it became clear that he was serious. I have come to love inline skating and skate often. I mention this because it has a bearing on how I came to start riding. The route I take to get to the trail I most often skate takes me past a lawn and outdoor equipment store that also sells go-karts and occasionally scooters. For the longest while,  they had a beautiful little blue scooter setting right out in front of the store. It occurred to me that if I bought that scooter I could ride it to and from work like the cyclists rode their bikes.
I suspect I would never had taken action on this idea if my very mature and increasingly tired Ford Windstar van hadn't started showing signs of an impending major and very costly repair. Since I didn't want to buy a car before Spring it occurred to me the little blue scooter I saw five or six times a week might be just the thing. It would allow me to divert miles away from the van while saving money on gasoline at the same time.
When I bought the scooter I'd expected to endure the commute. At the very best, I'd hoped to find satisfaction in doing my part to decrease my country's dependence on oil. In no way, shape or manner did I imagine I might actually enjoy the ride. But, oh me, oh my, I most certainly have.

I must admit buying the scooter was more impulsive than I make it sound. Yes, all the things I've said about the van are true, but  you know what? I really wanted that scooter. If I'd truly thought about it, I'd not bought it. Here I was, a nearly sixty year old man who experiences brain storms that while not seizures have seizure like qualities, preparing to ride on two wheels. What was I thinking? I don't know, but it turned out to be the absolute right thing for me to do.
Happily, the brain storms happen quite infrequently now, I still have them from time to time. I actually had a major one just yesterday, but the frequency has radically decreased since I began riding. A coincidence? I don't think so.

I've learned on those days when I'm having a bad brain day, a day when I struggle to get my thoughts moving in a good orderly direction, going for a ride brings a clarity and order to my cognitive chaos. It still seems rather counter-intuitive that it could be a good idea to ride when my mind is so muddled, yet it is.