A Touch Or Two Of Color

Went out for a nice little urban ride on Saturday. I was out for about an hour and a half. The temperature was right at freezing or a little below. The sun was out and made it feel a little warmer. 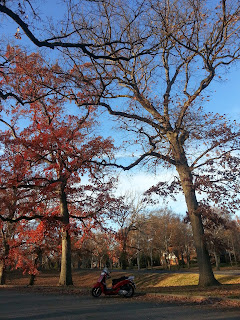 There is still a touch or two of color, but it is pretty much done for the season. Tomorrow there is even talk of wintry mix. It may be my first not ride day of the year. We'll see.
Posted by Keith - Circle Blue at 10:26 PM 4 comments:

When Heather and I came home from my gig on Saturday night it was raining. 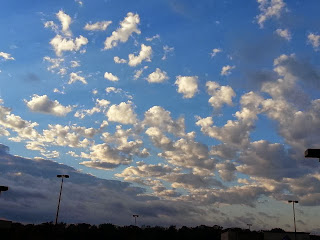 The following morning it seemed to be clearing. The forecast was for possible storms and a wind advisory was in effect. The big thing was how warm it was. It was in the 70'sF and humid by 0800CST and that just isn't normal for this time of year. 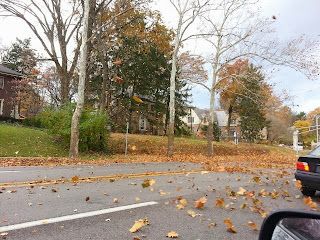 By lunchtime the wind had picked up dramatically and it was clouding over. The leaves were dancing in the streets and when I took the above photo it still felt more sunny than cloudy.

Ten minutes later just as I parked it looked much different. 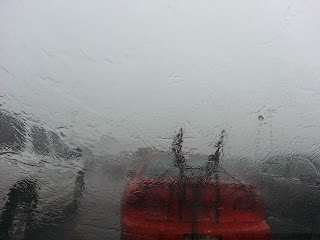 And it felt different, too. The Yaris was shaking. Four minutes later it looked like this: 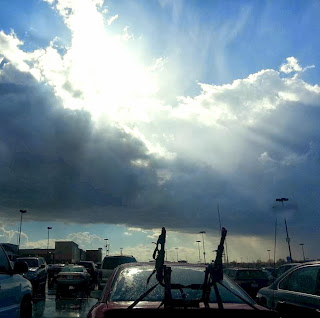 Even for someone used to the capriciousness of Midwestern weather this was dramatic. Just as it cleared my phone beeped with a Severe Thunderstorm Warning. They got that right, but a little late for me.

I finished my errands which was  more of an adventure than usual. Many stoplights weren't working including one near where I live. It seemed easier to make a right hand turn rather and come home the "back way" rather than do the unplanned four way stop thing one more time. I'd had my fill of this game of post storm roulette.

As I turned on my street  this is what I saw ahead of me: 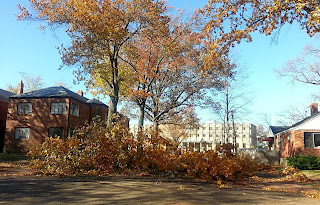 If I'd tried to come home my normal way the street would have been blocked. After I unloaded my groceries I went out to examine the damage. 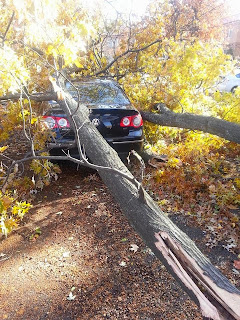 Surprisingly of the two cars damaged this one came out on the better end. It's windshield was smashed and the driver's side mirror was broken off. 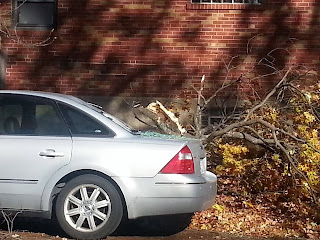 This car had its rear window taken out totally and the roof was bent in. Sad.

These wonderful old trees are beautiful, but . . .

Still, as the news came in of the damage done in other places we were very lucky here. Even the folks who were unlucky enough to be parked where they were will drive their cars again.

I knew I needed to replace my computer. It was eight years old was developing some problems. I just didn't know I was going to need to replace it so soon.

I spent the weekend setting up  the new computer set up and getting some experience with the new operating system. I did manage to download some photos over the weekend, but promptly forgot how I did it.

I'm developing a little comfort with the new beast, but it comes a day late for my publishing in a timely manner the photos I took during my annual ride over to Jefferson Barracks National Cemetery. I am a day late . . . 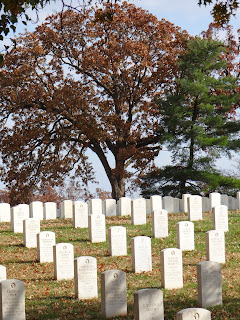 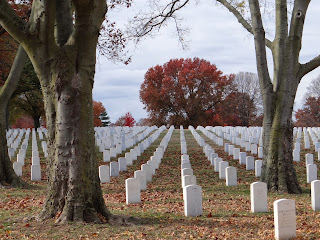 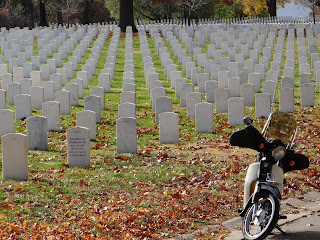 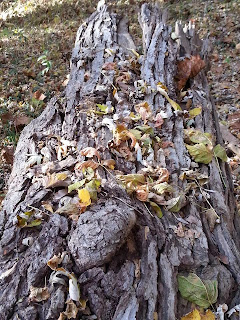 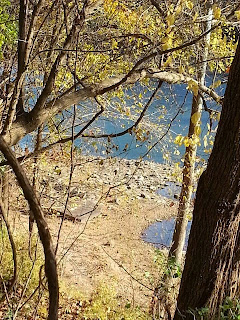