Where Would You Be?

It's 90F/32C outside. We've yet to turn on the air conditioner. We do have the ceiling fans going. If you are a cat where do you choose to hang out?

And, if you are a motorcycle rider where would you be?


On the road, of course.

What to wear? I saw a guy on a cruiser wearing a full face helmet, tank top, cut-offs, and flip-flops. I made some other choices.

I rode for close to a hundred miles, which was over three hours seat time. I got warm only once. 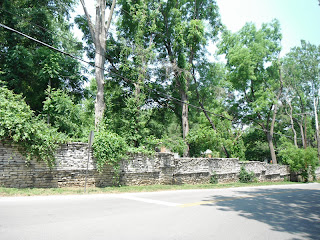 the lack of humidity doesn't hurt either.
Posted by Keith - Circle Blue at 7:44 PM 16 comments:

Sometimes before a three day weekend the Court declares an early dismissal. Today was such a day. It allowed me to take the long way home. 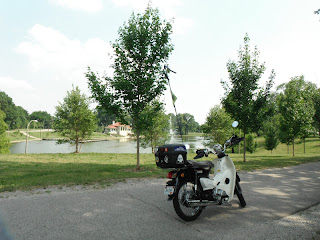 It was a typical here and there urban ride. 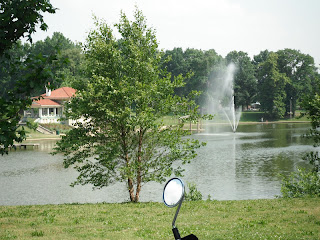 Lots of side streets and parks. 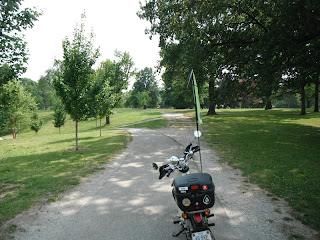 It was an easy ride. Traffic was light. Everyone behaved. It was simply delicious.

The morning ride? It, too, was good, but it definitely had a different flavor. I wrote about it over in my other blog: Did He Ride Today?.

Whether you are facing a three day weekend or a regular same old, same old weekend, I hope it turns out to be a special one for you.

Today was Billie's day and we'll get to that. But first, yesterday was Heather and my first real land paddle of 2012. I don't know why we haven't been out sooner. The weather certainly hasn't been the problem. I'm guessing we've just been hiking more.


In addition to turtles we saw deer, wild turkeys, and a white heron, but they all escaped the camera.  We think we may have spotted a bobcat as well, but aren't certain. Heather did get a photo, but it is of Loch Ness monster quality, so not very helpful or conclusive.


Today was Billie's day.  Today Billie got her Spring bath. Chris over at Everyday Riding is on a seven week moto adventure which has already taken him to Alaska. He isn't fooling me. I'm thinking the real reason he took this trip was to postpone cleaning off the winter grime from his Ural. The stuff we spray on our bikes to keep them from becoming rust buckets does its job, but the Spring cleaning is no fun.

I'd like to think I've been busy and not practicing avoidance. That said, I will admit the springtime bath is not my favorite job.


It was much worse last spring. This winter was very mild and I had only a handful of "chemical days"--those days the road crews spray "ice melt" on the roads. Still, the grime builds up.

I spent some time on Cherokee Street this weekend. I went there to look at the buildings, but found the vehicles I saw more interesting.

And, speaking of bicycles.....


Happily, the Yamaha looked to be well taken care of and in regular use.
Posted by Keith - Circle Blue at 9:00 PM 6 comments:

The Last Mound In St. Louis

I've visited Cahokia Mounds many times over the years I've lived in St. Louis. At one time there were over 40 mounds located in St. Louis but all but one of them was gone by 1904. Some time ago, I'd seen an article about the lone remaining mound being purchased by the Osage Nation.

Heather and I searched it out today. Over the years it has been called Sugarloaf Mound. It was 2009 when the Osage Nation purchased it. It is located on Ohio St. south of I-55.

When we got there we parked the car. There were "No Trespassing" signs posted. We were taking photos from the Street when the woman who lives next door pulled out of her driveway. She stopped by us and rolled down her window. "Are you looking for the caves," she asked. Apparently some people had contacted her about showing them where the entrances to the old caves were on the property. We told her we weren't, we were just looking at the Mound. She told us to feel free to roam around. The signs were just to keep the kids out. So we did.


I know the plan had been for the area to become an historical interpretive site. These things take time. I hope it comes to pass.
Posted by Keith - Circle Blue at 9:40 PM 8 comments:

I wasn't preaching today, which meant I could ride to Church, rather than drive. Actually, I wasn't scheduled to do anything at Church today other than be there. As I left the condo I found myself thinking it would be a most excellent day to play hooky. There even seemed to be a good reason to do so. Theoretically I retired May 1. It is theoretical because I've been pretty much retired from Church work for a few years now. I knew I was rationalizing, but still.....

I decided to swing by the Church and talk with Doris. Doris is the Priest I help out at St. Matthew's. It was 0730hr and I knew she'd already be in the office. When I walked in she said, "What are you doing here? I thought you were going to be in Illinois this week." I told her I'd gone to Illinois last week after Church, but now that she had mentioned it, it did seem like it would be good for my soul to spend some time riding. She was good with that. And off I went.

I wasn't planning a very big ride. After Church, I'd planned to head up to Cabela's to pick up a couple of things. I decided I'd just add dropping down into the Missouri flood plain near where I lived when I first moved to St. Louis to the agenda. 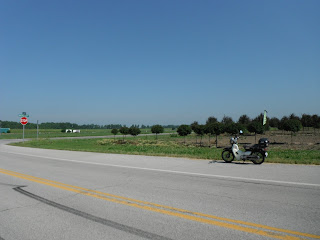 I grew up on a farm and really am forlorn when I can't check out crops. I'm a total Flatlander at heart. I appreciate photos of mountains, but whenever I've traveled there I've found I'm my father's son. It just looks like bad farmland and I can't wait to get back to the areas most others call boring. 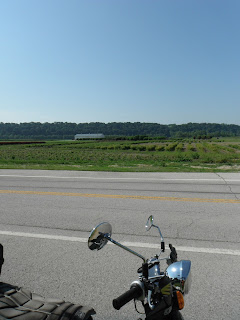 Notice the tree covered ridge in the distance. Just beyond that ridge is Olive Street Rd. with its urban sprawl. But, below the ridge there are nurseries and corn fields and truck farms.

Since I was in the neighborhood, I couldn't pass up Creve Couer Lake. 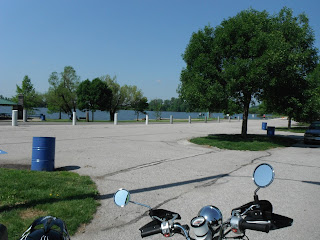 On my way to Cabelas I've notice a road. There is a "Caution One Lane Bridge" sign visible from where I travel. Each time I've gone past it's intrigued me and I've been thinking I should see where it went. I decided today was the day to find out. 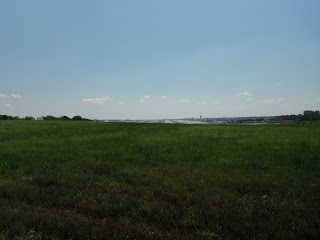 I discovered it ended up running along the northern boundary of Lambert International Airport. If you click on the photo hopefully it will enlarge and you can see the Control Tower and some of the runways.

The road ended at Lindbergh Ave. Back in February I'd taken a rainy day road trip. (Click here to view the post). I mentioned in the post I thought I'd found a way to cross the Missouri River on Billie. Lindbergh Ave. would lead me to that bridge. I decided I'd check it out, but wasn't sure I was going to try the crossing. Still I thought it would be a good idea to get gas. 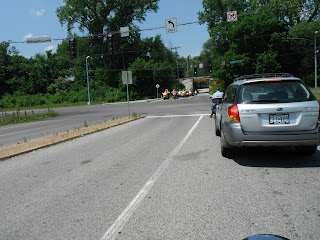 It's a good thing I did. Not only did the crossing of the bridge go well, but I found myself turning onto West Missouri Rte.94. There was a welcoming committee waiting for me. How could I resist? I couldn't, nor did I try very hard.

The ride on 94 was gentle. I saw lots of Harleys and a couple of scooters. I didn't see any sportbikes. The road was mostly flat and straight. When there was a curve it was a sweeper. And, there wasn't much to look at other than the crops. I loved it.

When I got to the outskirts of St. Charles I decided I'd better stop and get something to eat. I'm not the carnivore I once was and I don't miss it much, but now and again I get a hankering for a all beef hotdog. When most folk see a Dairy Queen they think ice cream. Not me. I think hotdog.

When I walked into DQ a young man said to me, "What's up?" I never quite know how to respond to comments like that. I think I said, "Same old, same old." If not it was something equally un-clever I'm sure. The next time I passed them he said, "Aren't you hot in all that stuff?" My response? I pointed to the young woman he was with and said, "You'll have to ask her?" We laughed and this began a nice conversation.

I got some directions from Houston. Since I hadn't really expected to end up in St. Charles County I hadn't a map. I'd been sort going from memory of the February drive and my sketchy knowledge of St. Charles. It all worked out. I made it through St. Charles without accidentally ending up on an Interstate and then I crossed back over the Missouri River on the Page Extension.

I still didn't go straight home. I made my way back to Olive Street Rd. and went west. This took me by Faust Park. 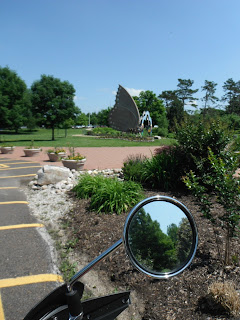 There is a Butterfly House in Faust Park. I never been., but Heather and I plan to remedy that very soon. 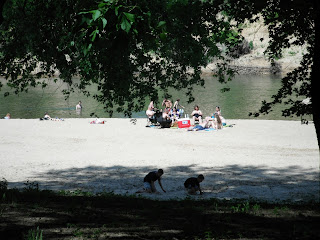 By this time the temperatures had risen to 92F/33C  Folks were enjoying the old swimming hole. I got to witness a little drama. A couple of Park Rangers came down and inspected the cooler of one of the parties on the beach. 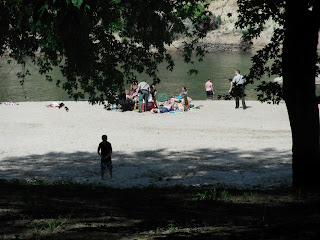 I don't think they found anything, but it was enough to break up the party. It seemed like a good time for me to leave as well.

From Castlewood I headed straight home. When all was said and done this little ride up to Cabela's ended up being close to 150mi/240km. I left the condo at 0700hr and returned a little after 1600hr.

I got home in time to change gear and head to Grant's Trail and fit in a 7mi/11km inline skate. Is life good or what?
Posted by Keith - Circle Blue at 9:50 PM 14 comments: