I'm from Michigan. It gets cold in Michigan. I can handle the cold. Its ways are familiar. Its seductions known. The heat remained pretty much a stranger until I moved to Oklahoma. Even then, I wasn't very good at handling heat.

I'm getting better at it now. I believe the main reasons is riding Billie, my Symba.

Last Sunday I was riding through some residential neighborhoods. It was hot. And, there were no people in sight anywhere. No one was sitting  in the shade and turning their faces to the occasional breeze. I traveled through some alleys and the backyards were abandoned as well. I suspect everyone was inside comfortable with their air conditioners on.

Air conditioning is a wonderful thing. The last summer St. Louis experienced like this summer was 1936. That summer 479 people died of heat related illnesses. This summer the count is 23 people. No one can argue air conditioning has made a big difference, a good difference.

Still, I'm grateful I'm leaning into the heat. Heat isn't something you conquer. It is something you have to cooperate with, become intimate with, befriend. My body is adapting. What was unbearable isn't so much now. I'm using my head to move safely through this treacherous time. Why? There is a satisfaction in doing it and doing it safely. Also, there are so many wonders outside to behold. 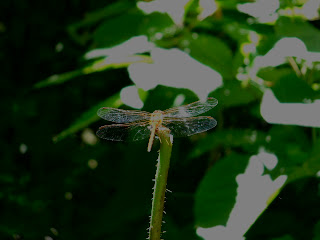 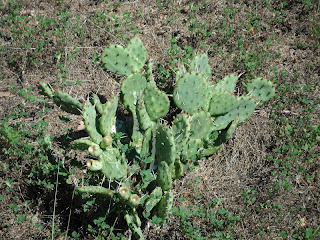 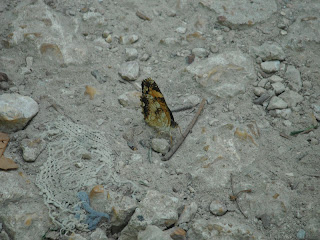 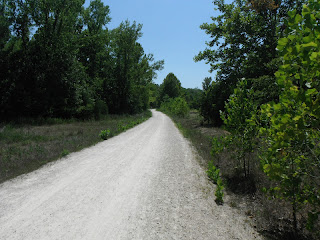 There was an article in the Post Dispatch Sunday about a man who died in this summer's heat. I know it is important to be smart and not stubborn when it comes to the heat. Hydration is critical and protecting ones core body temperature is crucial. (Click here to read the article)

If you're riding where it is hot: Please, be safe. Please, be sane. And, I hope you are continuing to experience the world around you.

Pop Off Its Tail

Last weekend Heather and I wandered around one of our favorite places to hike, Castlewood State Park. On this day we hiked Grotpeter and Lone Wolf Trails. And, we saw a couple of blue tailed skinks. At the time we sighted them, we didn't know what they were. But, we do now, and I suspect we'll see more of them now we know they are there.

Apparently, when this little reptile feels endangered it can pop off its tail. Its tail continues to wiggle drawing the attention of the predator while the little skink makes its escape. I am happy to say, neither of the skinks we saw felt the need to go tail-less.
Posted by Keith - Circle Blue at 9:14 PM 10 comments:

Today for the first time I found myself wanting to publish the same post in both this blog and in my other blog. I thought about publishing it in both blogs, but I ended up deciding to publish it in Did He Ride Today?, and then put a note here. I know some of you read both of my blogs and I thank you for putting up with so much of me. But for those of you who read only this blog, I think you may enjoy this particular post. If you're game just click here to read how today Life seemed determined to not let me have a bad day.
Posted by Keith - Circle Blue at 10:15 PM 4 comments:

A couple of posts ago I mentioned a photo of me riding in my little red wagon hitched to my Grandpa's Farmall A. (click here to read the original post). Thanks to my Dad and Sister the photo has been found.

By the way, the tractor is still going and it has a name. My Grandpa named it Tiny. Until recently it was mowing the roadsides around my Dad's place and beyond. The little red wagon? Alas, it didn't age so well.

A postscript about the little red wagon:


Your little red wagon did age well.
A few years ago I repaired and gave it a paint job.
I use it to haul junk to the road for pickup.
Dad
When I last saw the little red wagon it wasn't doing very well, but I'm not at all surprised to learn my Dad has fixed it up.  It is what he does.
Posted by Keith - Circle Blue at 9:42 PM 18 comments: 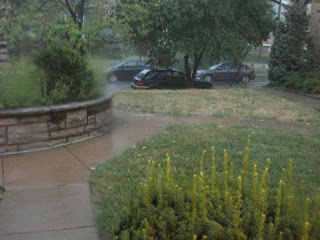 And, not just a quick five minutes and gone. So far a little over an half of inch of rain has fallen, and it is still raining. 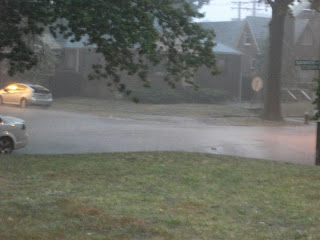 I was out and about out in the country yesterday. The corn is past help, but the soybeans will certainly perk up a bit with a nice drink.

Email ThisBlogThis!Share to TwitterShare to FacebookShare to Pinterest
Labels: Weather

I Am On Vacation

I had hopes for this vacation time. Originally I thought it might mean a trip to Michigan, but that didn't happen. Then, I thought it might bring a new scooter into the garage, but that was not to be. I even thought I might be doing a lot of riding and inline skating, but it is so very hot here. So, of course, that hasn't happened either. All this left me only one alternative. I went out an bought some new gear.

Cyclegear has their HEAT-OUT base layer garments on sale--50% off. I bought both the "long johns" and a "long sleeve crew neck top".

Today was the day for the new washer and dryer to be delivered. All went well. The delivery guys came on time, made quick work of hooking up the set, and then were on their way. It was still before noon and the temperature had just reach 100F/38C. I figured if I was going to go for a ride, I'd better do it before it got really hot. And besides, it seemed  a great opportunity to test the new gear.

While I was testing my new base layer, one of the places I found myself was Creve Coeur Lake.


I, also, checked out some corn fields. What I found wasn't pretty.

I did see some irrigation going on and some activity in the fields.


Back in the City the grass, too, is turning brown.


There were clouds in the sky, but the earliest we might see rain is early next week.


I was very impressed with the HEAT-OFF garments. I was hot, but not uncomfortably so. When I ended my ride I still had energy. It was 105F/41C when I returned from my ride. The heat index wasn't much higher than the actual temperature. Nothing much works when the humidity is up, but these undergarments matched with vented pants and an armored meshed jacket work well for today's condition.

On a another note. Early in my ride I came up Sappington Rd. At Big Bend Blvd. I found traffic backed up and although I'd planned to turn left, I decided to turn right so as to escape whatever the commotion was. When I returned home and went online I saw this headline on the St. Louis Post-Dispatch  website: Two Motorcyclists Killed in Crash in St. Louis County. This was the commotion I'd encountered near Sappington and Big Bend. (click here to read the story) It appears to be another case of a car turning into the path of a motorcycle. I would have been there not long after the accident happened. I know the intersection where it happened. Until today there was nothing remarkable about it, but from now on it will be another reminder of the danger lurking in all intersections.

Please, you all; stay cool, be safe, and take no intersection for granted.
Posted by Keith - Circle Blue at 8:20 PM 8 comments:

Tractors. I grew up around tractors. From before I  have memories there are pictures of me and tractors. I suppose we all have those photos parents love to show from our childhood, often embarrassing photos, but not always. Such a photo shows me in my little red wagon hitched to the back of my Grandpa's Farmall CultiVision A. Apparently, I would ride for hours behind him as he cultivated. I don't remember. But some of my earliest and fondest memories are of sitting between Grandpa's legs and steering the tractor, and then later, of sitting on the fender just riding back and forth from headland to headland, just keeping him company. It was around the age of ten when I began driving tractor in the field for myself.


Tractors. It has become clear to me the moments I enjoy most riding are connected to these experiences of riding on and driving tractor. My favorite rides have been on roads surrounded by crops.  My second favorite rides are puttering through neighborhoods hunting the occasional lawn art, pink flamingo, or turkey.


Tractors. I, also, love the being out in the elements. I enjoy the challenge of staying warm in the winter and surviving the heat in the summer. For me, dealing with the weather is a big part of the adventure of riding.

Until I made the connection between my riding and my experience of being raised with tractors I'd wondered how so many others could talk of flying like birds. My riding seemed more plodding, equestrian, and utilitarian. Now I have a clue. There was a peacefulness, an attentiveness, and a connectedness I felt once upon a time in those fields of my growing up. I was deeply longing to taste this experience again and didn't even know it. I'm grateful to have it back.