I Had A Hunch

Last Saturday was a marvelous Spring Day . . . perfect weather for working on ones bike outside. It was also perfect riding weather, but I had a hunch I might find him working on his bike.

When I first starting seeing his bike parked on the street, it was red. Unlike the yellow BMW, it wasn't always in its spot when I rode home, but it was there often enough that I began to look for it. Then it just disappeared. This isn't unusual. People move and bikes get sold or stolen, but, not this bike. It reappeared. Or at least I thought it was the same bike. It had changed color. It was black and not red.

One day, either a holiday or a Saturday, I happened to be riding through the neighborhood and not only was the bike outside, but a man was working on it. Curiosity made me stop and ask if it was the same bike or not. Yes, it was the same bike. Come to find out it not only has been red and black, but at one time it was gray. It was only after I left and was well down the road that it occurred to me I could have asked to take his picture and a picture of his bike. I've been looking to remedy that situation for sometime.

Saturday I was in luck. He was outside working on his bike.


He and I had another great conversation. And, this time before I left I asked if I could take his picture and he let me. 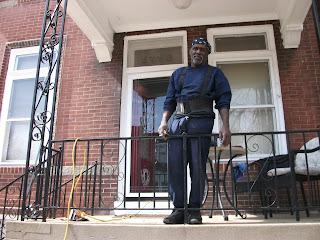 He tells me he can't make up his mind between red and black, but plans to paint it red again. He also said,  that he probably ought to paint it both red and black and be done with it. Somehow, I suspect that even if he did go two tone that wouldn't be the end of it.
Posted by Keith - Circle Blue at 10:32 PM

Email ThisBlogThis!Share to TwitterShare to FacebookShare to Pinterest
Labels: People