One Still Falling Down And Another Showing Progress And . . .

Awhile back I posted about a building that had been slowly falling down. I'd been watching its demise on my daily commute.


This Spring has brought some very strong winds and now I am watching the further demise of the remaining portion of the building.
There is still a family living in the building next to this one. I'm curious what will happen next.

On a happier building note, there is a row of buildings that have been being rehabbed. When last I posted about them they looked like this:
There have been workers on the site all winter, but all the work has been inside. Just in the last two weeks has the progress began to be show on the outside.

The workers are gone by the time I get out in the evening. On a morning when I am either off during the week or can arrange to go into work late, I'm hoping to stop by and see if I can get some information on what the plans are for these buildings. And, if I'm really lucky maybe I will find out some of the history of these buildings.

Now there is another building on my daily commute that is being worked on. I can't tell if it is still being used or not. I had noticed the building before mostly because it had no windows. 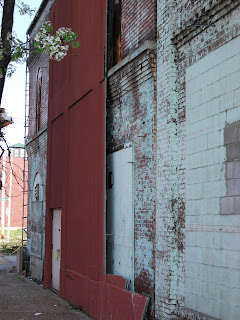 I wonder what is going to happen to this building next? Is it getting a new facelift or what?


There is so much going on in my little eight and a half mile commute, and that doesn't even include the traffic. Speaking of traffic, it has actually lightened up on some of my route. There has been a speed reduction on Arsenal Street next to Tower Grove Park. 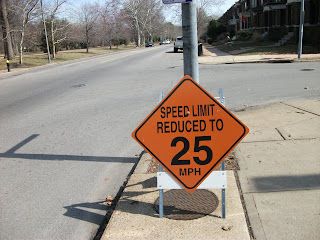 Since the reduction has gone into effect there has been a reduction in traffic. I'd not expected the speed reduction to make much of a difference, but St. Louis' Finest are actually enforcing this change. When the speed limit was ten mph higher people were adding another ten. With all the three-way stops on this route, it was hurry up and wait. Now, traffic is flowing nicely at about 30mph, which seems a good speed for this section of street. And, with less traffic it has cut time off my commute. Plus the incidents of folks passing illegally on my right, apparently in a hurry to get to the next stop sign to wait their turn behind five or six cars, has dropped as well. Don't you just  love it when a plan comes together.
Posted by Keith - Circle Blue at 3:39 PM