And What Did Heather Think?

Wow, when it comes to blogging it seems I'm only 1-for-May. I'm not exactly sure why. I know it hasn't been because of a lack of experiences. It's true I've been busy, but I'm always busy. Also, I've had an annoying health issue going on, but it hasn't been of the sort to stop me from riding, inline skating some, hiking a lot, and even getting in the season's first land paddle. I do know part of my blogging fall-off has to do with Heather's work load lightening up and her being home more evenings and around on the weekends. It has been good to spend time with her.

So, let's begin to catch-up May. But, to do that I've got to go back to the last day of April. Actually, I need go back even a little more in time than that.

Yep, in early April Heather bought a helmet. She did it in preparation for what we had planned for the last day of April. We went to Spyderfest in Cuba, Missouri. Over two hundred Can-Am Spyders descended on the Mural City during the last week in April. We drove down on Saturday to check it out, eat some barbeque, and . . .
. . . to test ride a Spyder. 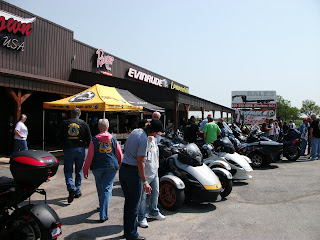 Sadly, we didn't get any pictures of us on the Spyder. Heather has never been on a motorcycle or an ATV or a trike. So, riding on the Spyder while I piloted it was a big first for her. Zach, the guy in charge of the demos, gave us a quick run down of the controls and how to put into reverse, gave us a few suggestions on where we might like to ride, and sent us on our way. We tested a RT with a semi-automatic transmission. It reminded me of my experience of driving a snowmobile. Of course, the way I ride a snowmobile has very little in common with the way my brother-in-law rides a snowmobile. You see, I have a slow hand and don't drift through the corners while approaching triple digits. That said, the Spyder easily took the curves at ten-plus mph above the posted speed. It did everything I asked of it. I liked the transmission, but I'm sure others would miss the clutch. Would I buy one? Well, definitely not a RT. Both Heather and me think it is butt-ugly. The RS on the other hand could be an interesting year around vehicle for me . . . if it didn't cost so much; and if it didn't get such horrible gas mileage; and if I was convinced I could afford to maintain it.


And, what did Heather think? I'm not exactly sure, but the next weekend we made a trip to Cyclegear and . . 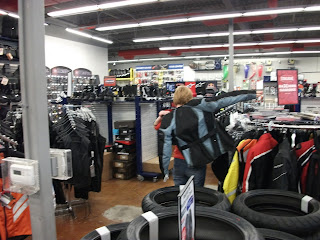 She bought a jacket.
Posted by Keith - Circle Blue at 9:34 PM

Email ThisBlogThis!Share to TwitterShare to FacebookShare to Pinterest
Labels: Bike Shopping, With Heather