It is divided highway and limited access with a speed limit of 60mph and a minimum speed of 40mph. It has at least four lanes each way. It is the Page Extension. It is the route I need ride my Symba to cross the Missouri River when traveling out to visit my son, daughter-in-law, and grand-daughter. It, also, has a really wide shoulder and is nearly deserted on the weekends. It was quite the adventure to ride this route before I got my chain replaced. Now it is not so bad. This time I touched 55smph (Symba miles per hour) a couple times over the bridge. Cars still whizzed by me, but they had lots of lanes to do it in.

The usual drill is I get there and we spend some time together and then go out for lunch. We are always going to go somewhere else, but always seem to end up at Chili's.


Next we head back to their place and I gear up and then head for home. Did I mention the temperature was 95F when I left for the kid's place? It was. And, it was 100F when I left their place. I had recharged my Glacier Tech Cool Vest while we were at lunch and put that on under my mesh Tourmaster jacket. The vest does keep my core cool and it holds its charge for over two hours in +100F heat. My only concern about it is how hard the "frozen" packets would be to fall on.

I was feeling so good about how well the bike was running and how well my hot weather gear was working that I decided not to go straight home. Creve Coeur Lake is one of my favorite destinations and it was on the way so I decided to stop by. Besides I was curious as to how many folks would be out in this kind of heat. Usually on a hot day you can't find a place to park, but that wasn't the case today.

There appeared to be a couple of reunions going on and if not for them I'd have had the place to myself.

I was going to take the long way home but it started to look like one of those late afternoon pop-up storms was brewing. Since the weather forecast hadn't mentioned rain I'd not brought my rain gear, but with it being over 100F I wasn't concerned about getting wet. So, I put my wallet and cellphone in the top case and away I went. But, the further I got the darker it got and then it began to thunder and lightning. I saw a McDonald's and decided that a lemonade would taste real good. 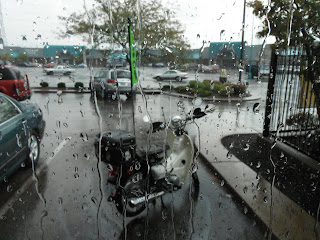 By the time I'd finished my lemonade the storm had passed and and blue skies had returned. 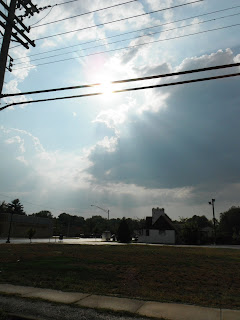 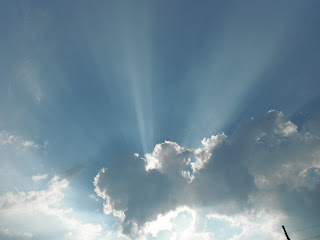