It is Spring, but a recent Sunday felt more like an early autumn day. It would be sunny one moment and spitting rain the next. There was a chill in the air. And, the sky was full of clouds. 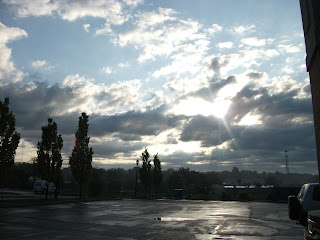 This wasn't the weather I was expecting. I had to preach in the morning and so my play day couldn't begin until the afternoon. I hoped the weather would be much like the day before with it's sunshine and 60F/15C temperatures. I wasn't aware there was rain in the forecast, but I woke to wet streets.

My original plan had been to inline skate or ride or best, do both. The uncertainty of rain took inline skating off the menu, but I could ride. 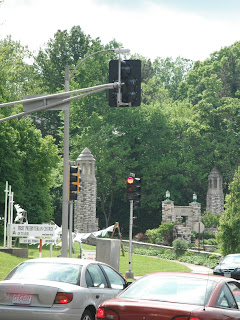 I passed the Presbyterian Church on Delmar. It seemed they had something special going on. This is the same Church which not long ago invited folks to bring ladders on a given Saturday and a sculptor used these to make an art installation. These looked to be some sort of flags, but the sign wasn't helpful and my curiosity wasn't aroused enough to do anything other than take this photo.

During one of the bursts of rain I got the idea to head over to the Community College where the Motorcycle Safety Classes are held. We had beautiful weather the weekend I took my course. During lunch I mentioned to one of the instructors how lucky we were to have such great weather. He agreed, but told me in some ways he liked it when it rained during the course. Yes, it was uncomfortable for him and often miserable for the students, but students who took the course in the rain learned something my class couldn't. They learned that everything we were taught worked in the rain, too. I'd been concerned about riding in the rain, but that comment opened something up in me. Of course, there are some traction issues, but that means slowing down, not staying home.

I wondered how the class was doing on this on again, off again rainy day. 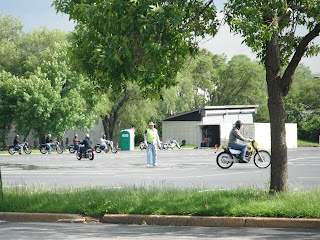 Of course, when I got there it wasn't raining and the sun was out. The course looked dry. When I took the course it was mostly DR's, Rebels, and 125cc Eliminators. It has been a while since I took the course and the fleet has changed. The majority of bikes were TU250X's. There was only one DR200. Who knows maybe it was the one I rode during class, but I doubt it. 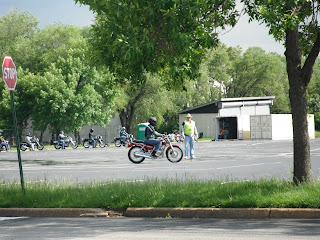 I hung around for a while just watching. A Harley rode by and seemed to check me out. He turned around and headed back toward me. He asked me if I was part of the program. I told him I wasn't. It seems he has a daughter who wants to take a class but lives outside the Metro area. He'd taken his basic training at a Harley-Davidson dealer, but had done an advanced class at the Community College. We talked for awhile. When he mentioned he'd had his bike up to 110mph, and I countered with having gotten 115mpg out of mine it became obvious we were very different riders, but it was obvious we both took safety seriously and loved to ride. We had a nice chat.

On my way home I passed this road side rest spot.

Another great urban ride, no matter what season it seemed to be.
Posted by Keith - Circle Blue at 8:21 PM