This morning I was driving not riding. I had the tanpoura with me, so Billie wouldn't have been an option even if she were sound. And since I wasn't riding Billie, the interstate became an option.

As I got on the the interstate I was relieved to see there were no new paving operations going on. It looked like it did the last time I was on it. MODOT is in the process of returning I-44 to four lanes. During the I-64 construction the lanes had been narrowed and the shoulders made nearly non-existant in order to create a fifth lane.

Now they are repaving and re-stripping I-44. As I exited I felt the car go up and over the lip created by fresh asphalt. Apparently they had paved this exit first. I hadn't expected it and in the car it was no big deal, but if I'd been on a bike....it could have been a very big deal--my front tire captured by the edge and control of the bike kidnapped and compromised.

I wondered if the different alertness, the different kind of seeing that riding triggers in me would have let me see the trap? Or, would I have been lulled by my perceptions that there was nothing new here, nothing to worry about? I can never know. This moment is gone and I'm left to wonder.....and to hopefully learn.

Later today I went back and took a few of pictures: 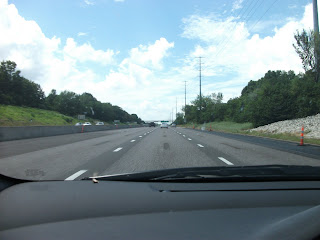 This is what I saw as I drove. It looks just as it did last week when I was on this stretch of road. I took this picture from a nearby overpass. This is my exit. 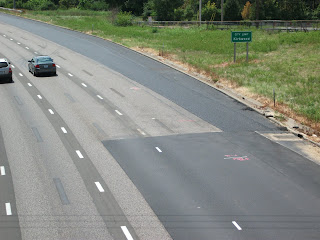