But To Where? I Didn't Have A Clue

Last Saturday I had to go to the bank. It was supposed to be a simple there and back errand, but the weather was really nice . . . and Heather was working . . .and I didn't really have anything to do that couldn't be put off until tomorrow. It seemed like a really good idea to just keep riding. But to where? I didn't have a clue.

I headed over toward Webster Groves. Webster Groves has some nice streets that I like to putter down. It seemed like a good place to start.

I crossed I-44 on Rock Hill Road. Often there is a young man standing on the sidewalk of this bridge. Sometimes he is holding a toy semi truck and trailer. He pumps his arm as trucks go under the overpass trying to get the truckers to sound their horns. He has been doing this for years and is well known. I didn't know they had named this crossing after him until today.

As I walked back to where I'd parked Billie I had to cross over some railroad tracks. I looked down the tracks and saw the old Webster train depot. Billie just had to have her picture taken in front of it. Off we went.

The trees here are just beginning to change color. I decided to ride around and see if I could find some more early performers like the one above.

In the process I discovered that Rock Hill was having their Fall Festival.


Just down the road is possibly my favorite named eating establishment.

I saw this little Autumn flower garden and thought it was nice.

And then there was this beauty. 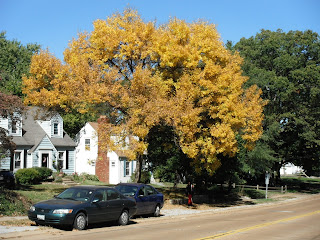 Here's a maple trying to get it's red on. 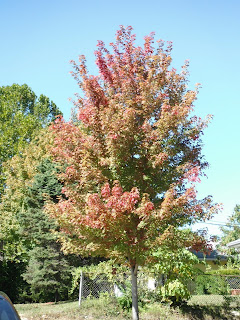 I started to wonder what the trees farther out looked like and decided to head for Castlewood State Park. On the way, since I had a developed a sub-theme of railroads, I stopped at the Big Bend and Geyer crossing and took this picture.


I found that not many of the trees in Castlewood have much color. They are at that fixing to change stage -- just sort of, kind of almost yellow but still green. 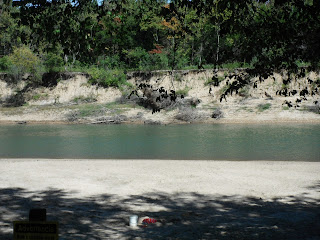 But there were plenty of leaves on the ground. 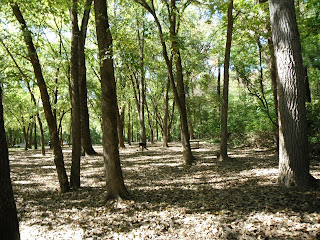 When I got back to the bike I noticed Billie had a visitor. 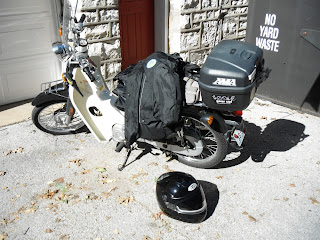