There Is No Such Thing

He was my mother's favorite cousin. My memory is of being told he lived with my grandparents for a while. His father was probably an alcoholic. His mother would occasionally babysit my sister and me.

His beginnings were not easy, but he was making a life for himself. I don't remember anything about his wife. I don't know if he was divorced or what, but I do know he had a son.

He rode a motorcycle. He, also, drove a milk truck.  Not the kind that delivers milk to stores, but the kind that picked up milk in bulk from diary farms. During the summer he would ride his motorcycle to where the truck was parked and his son would ride with him.

On a morning like so many other mornings my mother's cousin was riding to work with his son riding behind him, but this morning turned out to be a morning unlike any other. Was he a little later than usual or perhaps a little earlier? Was he in a hurry? I don't know. All I know is on this day an intersection that he and his son had been though probably hundreds of times, an intersection that seemed routine and harmless turned fatal. There was another car. They collided. I'm told he died instantly.  The son lived. He was the only one to survive the accident. With broken bones he managed to make his way the half mile or so to the nearest house. His Dad needed help and his determination pushed him to get it. He didn't know his Dad was already dead. It was all very sad.

I don't think my mother ever liked motorcycles much, but after her cousin was killed riding one she hated them. By the time I began riding my mother had been gone for a number of years. I'm sure if she had lived to see me riding she would not have been pleased. Truthfully, if she were still alive I suspect I wouldn't be riding.

I hadn't thought of my mother's cousin for years, but when I began riding that changed. He comes to mind often. He is in my head now. He won't let me forget that there is no such thing as a routine and harmless intersection. Never. Ever. 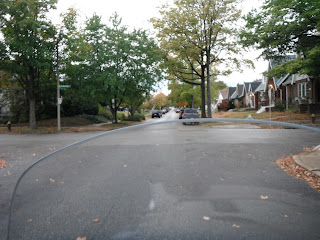