I didn't own a camera before I owned a scooter. I now have two. Both are point and shoot cameras. Actually, they are basically the same camera. The only difference between the two is one is waterproof. It is the newer of the two. When I ride it hangs from a lanyard around my neck. The older one has a case with a loop that I can wear on my belt when I'm not riding. Now I seldom am without a camera.

Riding a scooter has opened up the world around me. I see things I don't remember noticing before. Riding prompted me to get a camera. Now I find the camera, too, opens my eyes. 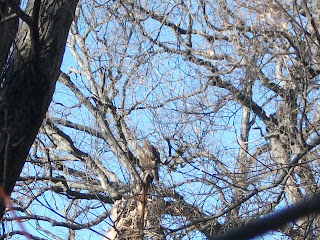 Heather and I visited Forest Park Saturday. I wasn't riding, but I had my camera on my belt. We walked through the old-growth woods at one end of the park and we spied a hawk up in a tree. I wasn't looking for the hawk, but I was looking. Because I was looking I saw.

After our nature walk we spent a few hours in the Zoo, which is also located in Forest Park. There was much to see there, but the real treasure happened when we were leaving. I caught something out of the corner of my eye. I stopped. I saw a hawk, perhaps the same hawk we'd seen earlier. 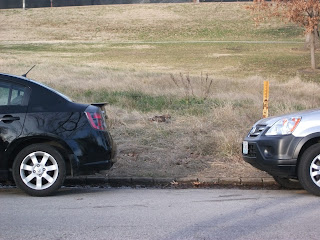 The hawk had it's prey. Its prey was struggling. Would it get away? 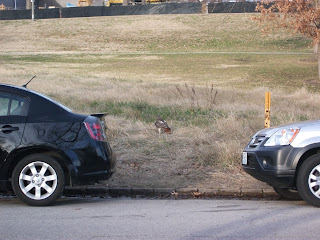 I watched and waited and took another photo. 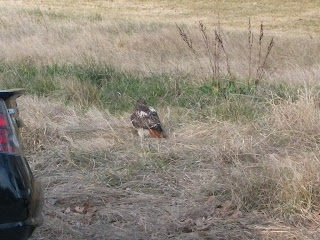 And, I took another. 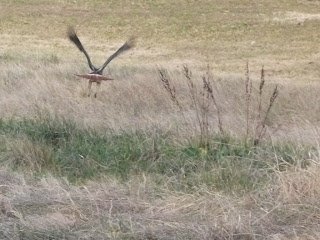 I've become a hunter much as the hawk. I collect images, some I capture in pixels, but most are but memories. Is it the hunt I enjoy or the freedom I feel as I ride? I don't know, but I sense I have a clue to what joy it must be to fly like the hawk, to respond to air currents and ride where they take me.

Last weekend we traveled to Kansas on I-70. We don't travel this road much. When we do travel on I-70 it is usually East rather than West. And, I-44 sees even more of our time. I-70 from St. Louis to Kansas City is different from the other Interstates we travel in at least one regard. The median is quite narrow. The median on I-70 to Indianapolis is much wider, as is the one on I-44. We noticed something as we drove West. We had never seen as many dead hawks on the road. Truthfully, we had hardly ever seen a dead hawk on the road. Heather was driving when I saw something unfold that I think may be the answer. A hawk went to fly from the median and barely escaped being hit by an oncoming truck. I suspect the nice mowed median makes for a great hunting area as it does on the other Interstates I mentioned, but the narrowness of this particular section means greater danger for these big birds as they attempt to fly off.

There is danger in riding. Riding calls for vigilance. A momentary lapse of attention at the wrong time and like the hawks on I-70 we can cease being the proud predator and fall prey to disaster.

There is something very natural about this, I suppose. Human's spend much time being the hunter and forget they too can be the hunted. I've come to wonder if knowing this is a vital part of our being--part of our feeling really alive. I hope to be wondering about this for many more miles.

Email ThisBlogThis!Share to TwitterShare to FacebookShare to Pinterest
Labels: Reflections