The Second Day of the Year

I didn't ride on New Year's Day, but I did make it out on the second day of the year.

My first ride of the new year was loosely tied to two destinations: Carodolet Park and Tower Grove Park. It was 33F with wind gusts of 40mph. Not ideal riding conditions, but other than the wind gusts not that bad either. Most importantly there was an abundance of sunshine.

I don't like wind, but I hadn't ridden since last Thursday and I was beginning to get a little grouchy. I was needing space.

First off I headed for Carodolet Park. I discovered this park anew when I traced the route of the Rock and Roll Marathon. It has become a favorite space of mine ever since. 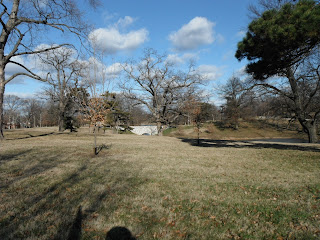 There is still a surprising amount of green around. And, don't you think clouds look crisper on a chilly day? 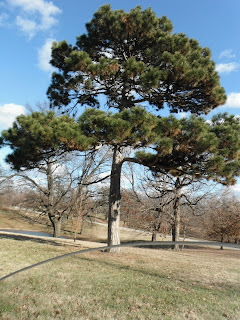 And, surrounded by trees that have lost their leaves, don't the trees with needles seem to stand a little more proudly? 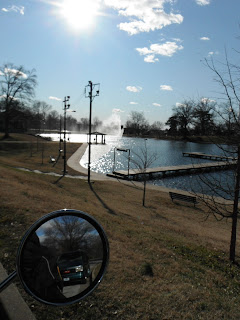 While not as windy as the day before, it was still plenty windy. You can see the mist from the aeration plume being blown toward the Boathouse.

Next to Tower Grove Park.

But, on my way to Tower Grove Park I happened by Roosevelt High School. 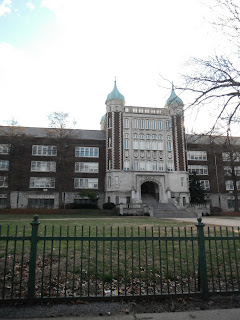 The light wasn't the best, but I couldn't resist taking a photo of this beautiful building.

What I love about Tower Grove Park is its wonderful picnic shelters and pavilions. I travel by the southern boundary of the Park on my morning commute to work. 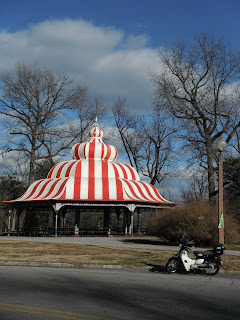 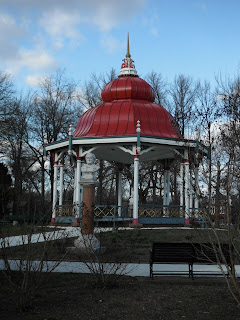 It seems that nearly every park of any size in the City has water features. Tower Grove Park is no exception. 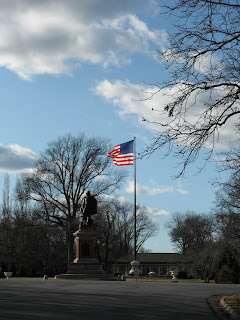 Did I mention the wind was blowing?

I thought I had.

Did I mention I was getting grouchy?

If I did, never mind.