They said it wasn't going to rain until evening. There were a few spots on the radar, but it was well west. The plan was to ride out Rte.61/67 for an hour and turn around and come back. This would get me home long before the rains were suppose to begin.

I had pulled in for gas just as it began to rain. Lucky for me I'd brought raingear. And, lucky for me I was stopped when it began to pour. Hmm, I guess today evening came early.

By the time I got to where Rte.61 breaks off of Rte.67 it had stopped raining and my hour was up. I pulled into a filling station, took a break, got some water and cooled off. 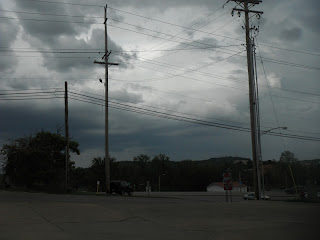 The sky seemed to be telling me it was a good idea to put the raingear back on. 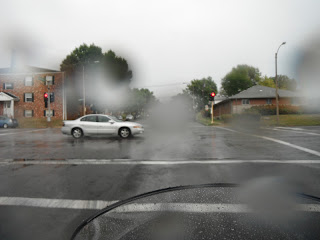 I only got a few miles down the road before it began raining again. It rained all the way home. It was a nice hour plus ride in the rain. It was good to know I remembered how to do it. I haven't had much opportunity since early March.


After taking off my gear I headed to REI. I'd been thinking it was time to rejuvenate the waterproofing on my pants. Today's ride in the rain confirmed my suspicion.