The Case of the Reluctant Scooter

My new scooter came from Kansas. How did that come about? One day I was out bike shopping and saw a really nice used 2009 People 250S. I was ready to buy it, but decided to call Mike, my tech wizard, and see what he thought of the deal. At one time he worked for Scooter World in Overland KS, which is a Kymco dealer. I figured he'd have an opinion, and I trust him. He told me he thought it was a good deal but not a great deal. I decided to hold off.

Later, Mike called Scooter World and found they had a brand new 2010 People 250S. They offered to sell it to me for what the other dealer wanted for the used People. I gobbled that deal up. And, Mike made me a sweet offer to trailer it from Kansas to St. Louis. Nice. They only catch was I had to wait until he was headed that way. Time passed and I was becoming a kid waiting for Santa. Is it Christmas yet? No, not yet, but soon.

Finally, last Saturday Mike headed for Kansas City. Sunday Heather took me over to his place and I laid eyes on my scooter for the first time. 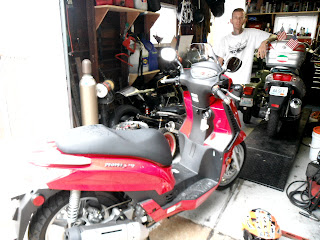 There was a slight problem. No headlights. Mike assured me it was fine for Heather to leave. He was sure it wasn't anything major, probably a fuse had jiggled loose on the ride across the State. After all, the headlight was working fine when he picked it up. He'd checked.

It wasn't a fuse. It turned out to be a relay. I figured that was a major problem. Nope. Mike will have Scooter World order a new relay. To get me on the road while we wait for a new relay, he rewired some things, bypassed the relay,  and I have headlights. Not a permanent fix, but a good solid temporary fix.

Now, I was going to get to ride my scooter for the first time. My insurance agent assured me I was insured. I had thirty days to register the scooter in Missouri, so while I wasn't technically legal I figured I was close enough. I took it slow through a few alleys. I was pulling out of the last alley unto an actual street when the scoot stalled...and, it wouldn't start. 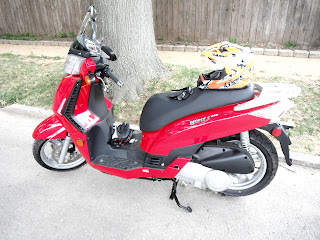 I called Mike. He said he'd be right there.

When he got there he did a few things and said, "I know what this is," and added, "It's the idle jet." He did some stuff and got it to start. My first experience of riding my new scooter on the street was keeping the idle up and making my way back to Mike's while hoping it wouldn't stall out again. I managed, but I can't say I was enjoying myself very much.

We figure it was my slow hand.

Mike proceeded to pull the carburetor. He worked his magic, put the carburetor back in, and three hours plus some minutes after Heather had dropped me off  I was finally on my way.

I didn't go straight home. It would have been the prudent thing to do and those of you who know me know I am generally prudent. Not today. Today I headed for Castlewood State Park and "the hill". Billie does this hill in second gear. The new scooter of course doesn't have gears, but it pulled up that hill without a problem. It even responded to a twist of my wrist and picked up speed mid-hill. I was smiling.

The ride was smooth and what a wonderful experience pulling away from stoplights was. Oh, and the brakes. Billie has drum brakes. The People has dual discs in the front and a nice large disc brake in the rear. I likey.

It was a short ride and I will have more to say as time unwinds and more road passes under the nice 16" tires. I can say this: I am certainly glad this new scooter got over what seemed like reluctance to join my little stable.

By the way, Billie knows she will still be my ride to work bike. And, I think she is relived knowing she will have no need to experience "the hill" ever again.

Email ThisBlogThis!Share to TwitterShare to FacebookShare to Pinterest
Labels: Isabelle