It is Veteran's Day.

The Courts were closed and so I had the day off. Veteran's Day doesn't seem to be as important of a Holiday as it was when I was growing up. I don't know if that's true. It's just how it seems to me. It has always been an important day for me.

I decided a good way to commemorate this Day would be to ride out to Jefferson Barracks National Cemetery.


http://en.wikipedia.org/wiki/Jefferson_Barracks_National_Cemetery
When I arrived at Jefferson Barracks National Cemetery I put Billie, my SYM Symba, in second gear and just let her putt, putt, putt along. I allowed myself to stop when I felt something. This seemed more appropriate than stopping because I saw something. 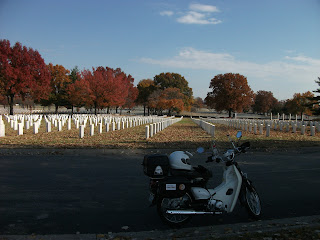 After I took a photo at my first stop I turned around. My eyes came to rest on an interesting headstone.


I spent a long time just moving slowly around the grounds. Whenever I felt the urge to stop I would and look out over the acres of graves. 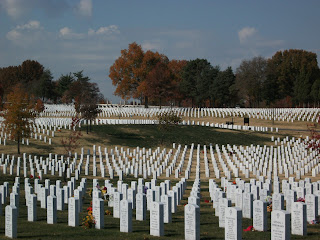 There were others doing what I was doing. And, there were those who were there obviously paying respects to a loved one. There was one scene I observed where two women, it looked like a mother and a daughter, were standing before a headstone holding hands. I thought of taking a picture, but decided it was a private moment and continued on.

There is a special quiet about the grounds. I notice it every time I visit. Today, it seemed more palpable than I remembered it. This is the first time I've been here on a Veteran's Day. Perhaps the quiet was deeper simply because it is Autumn and the song birds have left for the Winter. Always before when I have visited it has been Spring or Summer. So, it could be the season, but I suspect it was something more.
I left the Cemetery and rode over into the St. Louis County Park that is adjacent. 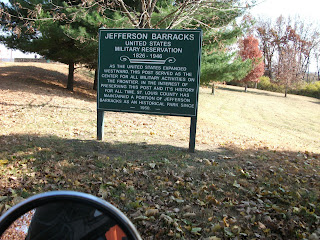 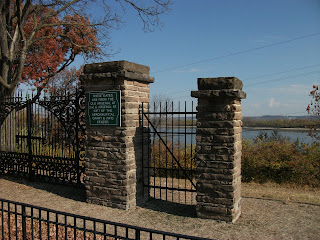 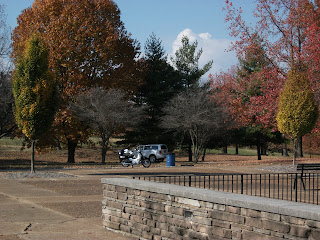 I left the Park and went riding South. I spent the rest of the afternoon wandering. I was on roads with names like Baumgartner, Hageman, Meramec Bottoms, Christopher, and many many more. I didn't ride until the cows came home, but when I did arrive home the moon was there to welcome me.
Posted by Keith - Circle Blue at 9:22 PM