I got my Symba, Billie, at the end of February 2010. I've rode when the temperature was in the 20's F and when it was 105F. I've never had any trouble with her running in the heat, but the cold has been another story.

She has always started right up. But in cold weather if I let her warm up until the idle backed off she would stall out. Then she wouldn't restart. Eventually, I discovered if I started her and then just took right off the outcome was better. That said, until the engine warmed up completely, Billie would often stall when I downshifted or needed to come to a stop. Not a good thing for an urban commuter. I, yes me, adjusted the idle screw up. I, also, worked at not letting off the throttle completely when coming to a stop. These things helped. I managed. And, fortunately, after I started taking off immediately after starting Billie if I did stall out she always started right back up with the electric starter. I was never stranded in traffic.

I wasn't aware how having the idle set high effected the performance of my Symba. For example, I now know the shifting wasn't as crisp as it can be. All I knew was this: I wasn't looking forward to going through this stalling crap again this winter.

Ironically, I, yes me, suspected I knew the answer. The Air/Fuel screw needed adjusting. The Symba like many other bikes comes into the States set lean. It runs fine, at least mine does, when the conditions are right. But when conditions are not right...then there is a problem. And it the A/F screw can't be adjusted then the problem persists. Sounds simple, yes? Alas, it is not. The A/F screw is glued in place at the factory in Taiwan and can't be adjusted. And, it isn't glued with just any glue, but glue designed to survive the Apocalypse.

A short time ago I read a posting on a Symba owners group that mentioned someone in Vancouver addressing the stalling and hesitation issues by replacing the pilot jet in the carburetor with one size larger. I wasn't sure exactly what that meant, but I mentioned it to Mike at Maplewood Scooter Company. And guess what? He suggested adjusting my A/F mixture screw. I mentioned the epoxy on the A/F screw. I mentioned getting in trouble with the EPA. I wondered out loud about my warranty. He just shrugged his shoulders, smiled, and repeated, "I'd rather start by adjusting the fuel/air mixture and go from there." And, I said, "Okay."

So, I took Billie into Maplewood Scooter and left her in Mike's hands. I'll leave it to your imaginations as to how it came to be possible for him to adjust the A/F mixture screw. I'll, also, leave you to guess why I now have a A/F mixture screw from a Genuine Buddy carburetor in my Symba carburetor.

The bottom-line is this: the results of Mike "tuning" my Symba are remarkable. I've ridden my Symba nearly 5500 miles and have enjoyed it immensely, but now it is like having a different bike. It is so smooth.

It hasn't got cold here yet, but today when I rode to work it was 38F. My Symba purred all the way. Before the adjustments even at these relatively mild temperatures there could well have been some problems. But today there was no stalling and no hesitation whatsoever.

I imagine there are areas in our country where adjusting the A/F mixture screw wouldn't be enough and a larger jet would be called for. For me here in the Midwest I suspect all I needed was a quarter turn adjustment to have my poor Billie get the fuel she needed and not starve into a stall.

There is one other thing Mike wants to do related to the carburetor to get ready for winter.  He is going to fabricate an air dam to channel warmth from the engine toward the carburetor.
I'm getting excited. I'm eager to see how the carburetor adjustments and this air dam improve Billie's cold weather performance. I rode Lil' Blue when it was 9F. I'm thinking Billie can do that now. Before I wasn't very confident.

I did a couple of other things over the weekend to get ready for winter. While Billie was at Maplewood Scooter I had the battery changed out. When I got her home I put tape over the slits in the hand guards. 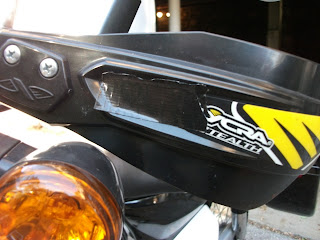 Email ThisBlogThis!Share to TwitterShare to FacebookShare to Pinterest
Labels: Symba