Day Three was to be an active day. We had packed the longboards and the Big Sticks.We hoped to land paddle on the Heartland Trail. When we were in Michigan last July we had planned to do the same thing, but someone forgot to pack one of the Big Sticks. I won't say who the culprit was. Let us just say it wasn't Heather.
The forecast had projected rain. But, knowing how the weather is in Michigan, we weren't surprised to find on waking that the forecast had changed. The rain was to hold off until late afternoon.

But before we went land paddling there was something we wanted to do first. On the way home the night before we had passed through Wheeler. Wheeler isn't even a town, but it has a large grain elevator and a receiving area for Sugar Beets. Heather wanted pictures. She had never seen crops stored on the ground.

It was late morning by the time we reached Alma and made our way to the parking lot at the Heartland trail head in Alma. The weather had changed again. The revised forecast was wrong. 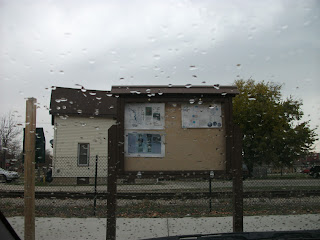 As we were gearing up it began to rain. I guess we were lucky that it started when it did and not a half hour later. It was chilly and being caught in the rain on the trail would not have been pleasant. 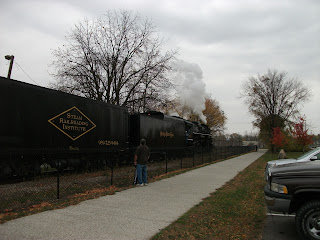 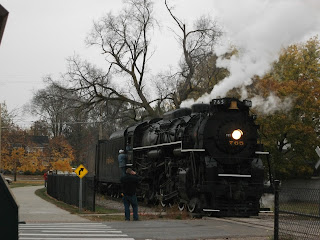 When we had entered Alma Heather had seen smoke. Recently there had been a major fire in Alma. She had said she hoped someone was burning something and not that something was burning. We didn't think much more of it.

But as we sat in the car waiting to see what the weather was going to do we heard a steam whistle...and then we saw a steam locomotive backing up on the track directly in front of where we were parked. This explained the smoke Heather had seen earlier.


We didn't get to land paddle, but we did get to see  this wonderful relic from railroad days past. The trail we would have been land paddling was once a railway. A pleasant surprise indeed.

And, we saw a scooter. In the time we were in Michigan I think we only saw a handful of bikes and those were on the trip home after the weather had changed yet again and things were warmer.

Since it was time for lunch we headed for The Great Wall. We discovered this restaurant on an earlier trip. It was raining very hard by the time we got there.


After we finished lunch we went back to Dad's and took a nice long nap. I guess we were worn out from the travels of the days before.
Posted by Keith - Circle Blue at 10:04 PM

Email ThisBlogThis!Share to TwitterShare to FacebookShare to Pinterest
Labels: Trips