I Am Forever the Optimist

Heather has been wanting to photograph a portion of the Riverlands Migratory  Bird Sanctuary. She wanted to get picture of it frozen. Since it was going to get up to 24F on Saturday it seemed a perfect day to head to the beach. 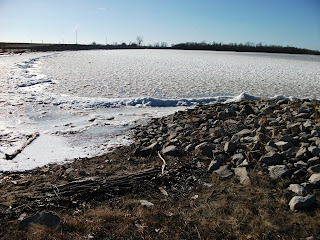 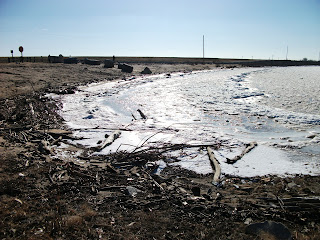 But, what she was really interested in was an area that has been flooded and only the stumps of trees are left. 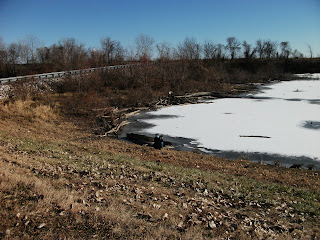 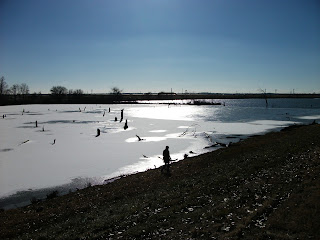 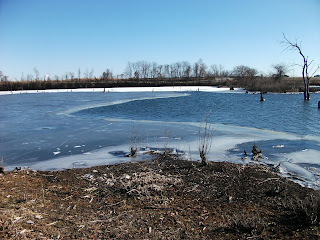 This area is very near the Confluence of the Mississippi and Missouri Rivers. As we were leaving we saw two American Bald Eagles standing on the ice in the river. I'm afraid they turned out to be no more than black specks since neither Heather nor I have the equipment to capture such photos. 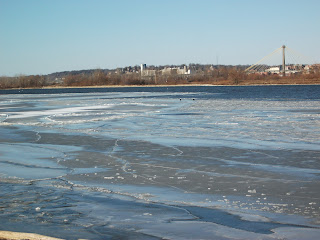 There were photographers with tripods and lens as long as my arm working at getting the perfect image. In the background is the Clark Bridge. I'm told it was the subject of a Nova episode on PBS called The Super Bridge.

Having gone to the beach on Saturday what could be better than on nice ride on Sunday.

It was 16F when I left the house. I had a twelve mile ride to get to Kirkwood and my customary Sunday morning bagels. Eventually, I made my way down to the buildings I've been watching be rehabbed. I didn't take any pictures of the bagels (or the oatmeal raisin cookie that we won't mention), but I did get some photos of the buildings.

All told I rode a little over 50 miles today. Eventually, I had to remove a layer as the temperatures flirted with 30F. I wasn't expecting it to warm up so much. I ended up riding in just my Arctiva snowmobile pants, my winter riding coat, and a Columbia Titanium microfleece pullover. The layer I removed was a Champion Puff outer layer jacket.

The forecast for tomorrow is snow. We may get up to four inches of the white stuff between Monday and Tuesday. So, I wanted to get out today. I, also, lubricated the chain, which I'm happy to report is still holding tension.

Finally, a closing treat. Heather and I found this peacock ornament on our walk New Year's Day. I'd hope it was a omen of good things to come in 2011 . . . 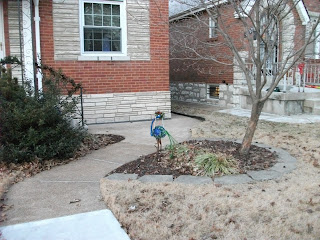 and, it may still be. Although it does seem we here in the USA are off to a rocky start with the shooting in Arizona, but I am forever the optimist.

Email ThisBlogThis!Share to TwitterShare to FacebookShare to Pinterest
Labels: Buildings, With Heather