I couldn't believe my ears.  The message on the weather hotline said the Courts were closed because of the snow. I am always surprised when the Courts close, and today was no exception. I was so distrustful of my ears that I called the weather hotline again just to make sure . . . and, sure enough, I got the same recorded message. It was true. The 22nd Judicial Circuit Court of the State of Missouri was closed for the day. Amazing.

Sadly, Heather did not have a snow day, but at least we could begin our day together. We walked over to our breakfast place, the place we first met.


She had her customary frozen mocha and I had my sesame bagel. After, too short of a time, Heather re-bundled herself up to head outside to the bus stop.


I waited around until Heather called to let me know she made it to work. Even though the bus was a little late, she was still able to make her connection with the train. She had a good commute. Tonight I think I'll go over to the Metro station and pick her up from the train so she doesn't have to catch the bus, or worse . . . walk. I figure this is the least I can do considering, through no fault of my own, I had a snow day . . . A SNOW DAY!


There was more snow on the ground than Christmas Eve Day. It made for much better snowshoeing. 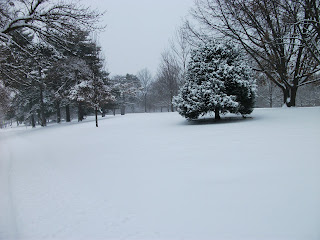 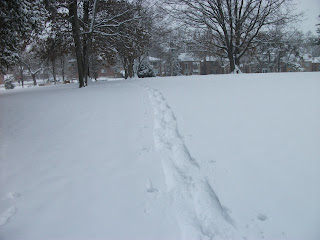 In the center of Francis Park is a lily pond. On my Christmas Eve Day walk I had passed this area up. Today walking to this area was the closest to a goal I was willing to set.


Of course, I had to go over to where the neighborhood kids go sledding.

I spent a little over two hours in the park just wandering here and there.

When I got home Billie again was willing to hold my snowshoes until they dried.

I spent the rest of the day keeping the cat company, playing on the computer, and trying unsuccessfully to feel guilty for having a snow day when Heather didn't.
Posted by Keith - Circle Blue at 5:22 PM

Email ThisBlogThis!Share to TwitterShare to FacebookShare to Pinterest
Labels: Snowshoeing