Billie went down, but I was not with her.

Last week during one of those "Scattered Thunderstorms, Some Possibly Severe" that "pop" up from time to time here in St. Louis during the Summer, the wind blew Billie, my Symba, over. One of the maintenance guys called the Fileroom trying to contact me, but I was in the other Courthouse at the time. So, my boss and Walter went down and set Billie back upright. When I got back, I went down and found her mostly damage free. It's good to be taken care of. I really appreciate Mark and Walter for being Billie's guardian angels.

The only real damage to Billie was to one of the panniers. I must admit to having a love hate affair with these panniers. I got them as part of a special deal when I bought the bike. They had to be ordered. When I first saw them they seemed very flimsy. Later, when they were installed the service techs said they couldn't hook up the lights in the panniers. This meant the original tail lights could only be seen by the person directly behind me. I didn't like this and eventually got them to install another set of lights in addition to the regular lights at my expense. These lights quit working after a month or two. Not a pleasant customer service or product quality experience.

I mentioned how flimsy these panniers seemed, yes? Well, they were plastic and the lids rubbed together. It was hard plastic on hard plastic. They were noisy and there was a trail of plastic dust on the panniers from the lid and the bottom of the panniers grinding away on each other. I lined both the lid and base with electrical tape and it stopped the rattling. Another annoyance was the need to remove the top box to open the panniers. Needless to say I didn't use them for storage very much.

Ah, but when Mike took over the service department at Maplewood Scooter my relationship to the panniers was transformed. He said it would be no problem to wire up the lights. And, when I finally got a chance to see how cool they were, well, all the pannier's past sins and shortcomings were forgiven, but not forgotten.


And, I went down, but Billie wasn't with me.

Last Monday evening I was inline skating on Grant's Trail. The previous Saturday I'd done a nice long slow skate of twenty miles (32.1km) and was doing intervals -- nearly full out sprints followed by recovery time. One cyclist had clocked me on one of my sprints as doing 18mph (29km/h).

As I approached where the trail crosses Union Road I had sprinting on my mind. I was due to begin one shortly after crossing Union. When I saw in the distance the clock on the crossing sign showed eight seconds. I figured if I began my sprint it would be tight but I could complete the crossing before the light changed . . . and I could have. What I hadn't allowed for was the car preparing to run a red light. We suspect he was going 35 to 40mph when he hit me. I remember impact and remember as much as is possible in such instances of what happened during the impact. I pretty well trashed his windshield. The first responders think my head hit there. I'm not so sure, but I know I was thrown ten or fifteen feet down the road after impact. I'm sure my head hit the pavement.

Importantly, given my head injury past, I was lucid all the time. There was no unconscious time. The helmet did its job. So, after an ambulance ride to St. Anthony's Hospital. I got to spend the evening meeting X-Ray and CAT scan technicians. I had an EKG. Everything checked out. I spent a couple of additional hours trying to give a urine specimen to rule out bleeding from the kidneys. That took forever, but I was finally successful and was released.

Yesterday, I was sore, but not as sore as I expected. I have had days after an American Rules Football game where I felt worse. I've felt no need to take any pain medication.

Today, I'm even less sore overall, but it is becoming clear to me where the points of contact were. I'm getting out and about. I drove over to have breakfast with Heather before she left for work. She took yesterday off to make sure I behaved myself. I, also, went by the the eyeglasses place to begin the process of replacing my glasses. The glasses didn't break and the vision technician said I did a good job of straightening them out, but the lenses are scratched pretty badly. Oh well, it was time for new glasses anyway.

My face is swelled up on one side where the glasses seem to have been jammed into my face, but it looks like I will avoid having a black eye. I still suspect the whole of my left leg will eventually blossom into one gigantic bruise. My right elbow has a scape on it. One small area of concern is some vertigo I'm experiencing, but that seems to be lessening. I took at least one major blow to the right side of the head and suspect this may be balance related and not concussion since it only happens when I bend over to get something or rollover in bed. In bed if I keep my head elevated as I roll no dizziness.


Tomorrow? I may actually go back to work. It is hard to believe I was hit by a car just two days ago.

The ER Physician, Dr. Vincent, saw some pictures one of the EMT's had taken of the car and of the scene of the accident. He was amazed I walked away from it. I was lucky. And, Dr. Vincent also pointed out being in really good physical condition certainly helped. Needless to say, wearing protective gear helped perhaps most of all. In addition to the helmet I was wearing knee and wrist guards. 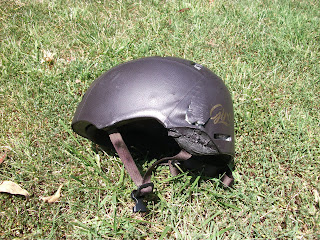 Oh well, add being hit by a car whilst inline skating to my resume.
Posted by Keith - Circle Blue at 11:54 AM