It has been hot and humid in St. Louis for what seems forever. But once upon a time it was cold here. Now people complain about the heat. Then they complained about the cold and the lingering ice. In that time of cold and ice on my dark winter night commutes home I would often see lights in a building at the corner of Shenandoah and Compton. It was both comforting and heart warming to know an artist was at work as I worked my way home. Each time I passed I would wonder about who this artist was and about her work. I knew her name was Carol Carter, the building had given me that much. I realized only after I met her that I could have "googled" her name, but I didn't think of it at the time.

Recently, as I rode Billie, me wee chariot, toward home in the long light and heat of a July day I noticed a poster in the window of the studio where I had seen those lights last winter. It announced an Open House on Saturday July 30th from10am to 4pm. I made a commitment to myself to be there.

It was raining as Heather and I made our way to the Open House. The rain was nice enough to let up as we arrived.

We opened the door and walked into a studio both sparse and filled with color. The woman we would soon learn was Carol welcomed us even as she spoke with others already there. We wandered around, and on what I suspect was an inspiration wall I found a very good omen.

When we did get to talk with Carol I told her I rode by her studio on my daily commute to work. I told her of seeing her in the studio during the winter as I rode home. I, also, mentioned to her I had a blog and was interested in learning more about her. She went over to a box and looked for something to give me. She handed me a magazine. It was the December 2009 issue of American Artist. She had it open to an article written by Stephen Doherty about a series of portraits she had done of her son as he grew from two weeks after his birth to young adulthood.

On Carol's blog under the heading Things You Need To Know is this statement: "Painting my whole life--watercolor especially...." From being in her space I sense this is certainly true. 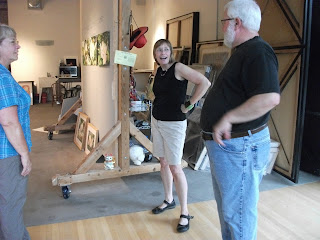 As I watched Carol being a gracious host to strangers and welcoming dear friends, I knew I was having an experience that I'm doubtful would have happened if not for my commuting to work by small motorcycle rather than car. Billie by her nature keeps me off the expressways, places me in neighborhoods, and demands my attentiveness. I by my nature find myself increasingly caring about these neighborhoods and meeting more and more of the folk that give these places life.

I loved Carol's use of color to open up the familiar and make it fresh. I'm very glad she has a  website, but I'm glad I didn't think to search it out before. It was a delight to meet both her and her work at the same time. That said, I hope you take a look. It's really good stuff.
Posted by Keith - Circle Blue at 9:12 PM