There are two intersections on my evening commute that are just too exciting for my taste. In the morning they are fine, but after work the traffic is heavier and this can create situations I'd rather avoid. So, now I have a new route home.

My new route led to the discovery of a house with a yard that is nearly all vegetable garden. It was obvious this was the home of a serious gardener. I had an uncle who was such a gardener. He was always out in his garden doing something. On Grant's trail I inline skate by a couple of gardens that remind me of his, but the garden I now pass on my commute home has a different feel to it. I think it has to do with it literally saturating the lot the house is on. It is a marvelously intense garden.

I kept hoping to get some photos of the garden before it had grown to the point where it would be difficult to get anything other than the vines growing up the fence, but either the weather kept promising rain and my camera isn't waterproof or I'd just forget to take the camera with me. I, also, really felt I wanted to ask the owner's permission before I took any photos.

Finally, one day I noticed a man weeding the garden. I stopped. He was delighted that I was delighted in his garden. Somehow it came up that I worked at the Courthouse Downtown. He asked me if that was where he would come to take the oath. It took me a moment to figure out that he was talking about becoming a citizen. He is originally from the Philippines, but was going to become an American citizen in just a couple of days. I told him that would be the Federal Courthouse, the one with the green dome. I work in the State Courthouse. We chatted for a while and as I prepared to leave he told me to feel free to stop and take as many pictures as I wished anytime I wished.

Last Wednesday I was able to stop by and not only take some pictures but congratulate my new gardening friend on becoming a new citizen. I was going to take some pictures from the outside, but he would have none of that. No, I had to come in a take lots of pictures of his garden. So, I did. He made me promise to come back when he was harvesting the fruits of his labors. I told him that I would. I suspect I will from time to time post photos of his garden. I'm looking forward to paying attention to how his garden grows. 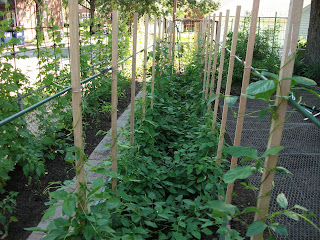 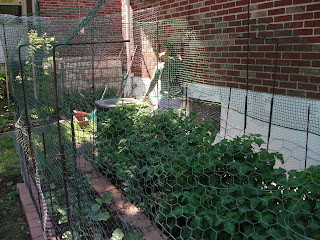 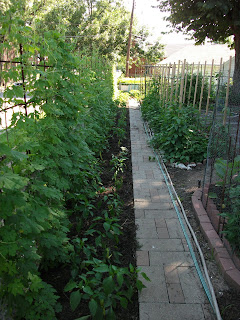 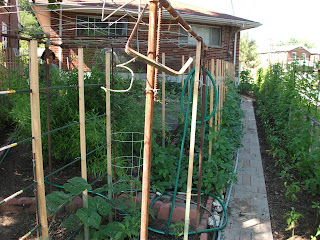 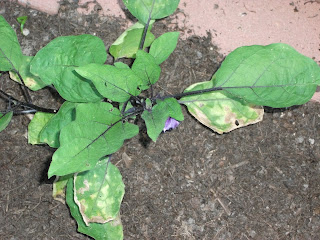 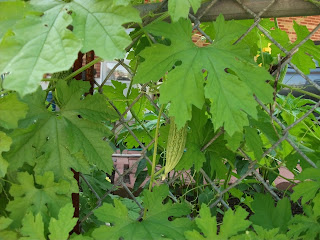 Once again, I'm grateful for another gift my commuting to work on the Symba has given me.
Posted by Keith - Circle Blue at 9:28 PM