A Chilly Day in February, Part 2

I've been wanting to take some photos of the MacArthur Bridge for some time. I travel near the bridge most mornings. In the morning the rising sun and traffic makes taking photos difficult. Some mornings with the fog hanging over the River it seems the bridge disappears into the clouds, which would make a great photo if the light wasn't all wrong.
At one time the MacArthur bridge was a car bridge as well as a railway bridge. Actually, I've learned it started its life as a car bridge even though it was originally built to break a railroad monopoly. (Click here for more about the bridge) It hasn't been a car bridge for a long time, but you can still see the evidence of its earlier dual purpose existence.

At one time Rte.66 used the MacArthur Bridge to cross the Mississippi.


War Memorial Park is not all that far, as the crow flies, from the MacArthur Bridge. It is very near where I work and given my interest in history and buildings I'm rather surprised I've not spent any time there. This day I didn't spend much time, but we are now definitely acquainted. 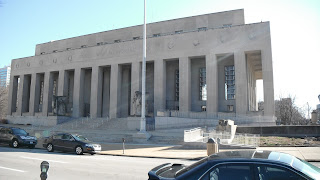 Finding myself at War Memorial Park really did come as a surprise. This is something that happens again and again when I'm riding. At times I'm convinced it is Miss Billie who is the one really in charge and I'm just along for the ride.

Sadly, the World War they were commemorating was not the war to end all wars after all. And so, across the street are both a memorial to War World II... 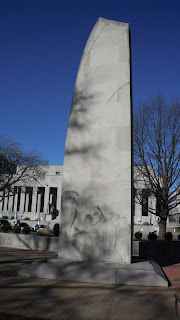 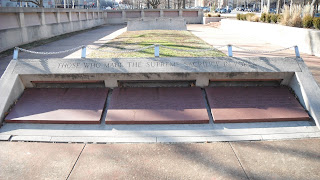 I hadn't known there was such a nice view of the St. Louis City Hall from the War Memorial Park.


There was only one thing I had hoped to accomplish when I set out on this ride. I wanted to scope out the new location of a restaurant which at one time had meant a lot to me and to my family.

When I was first introduced to Sameem's it was located on S. Grand Ave. After the divorce Sameem's came to be where my kid's, their families, and I gathered for Christmas Day Dinner and other special times. I took Heather To Sameem's the first time we went out. But, time brings change and the owners of Sameem's decided to move out to Baldwin and change their name. We tried to embrace this new location, but it never seemed quite right to us. And, last Christmas we even went to a different place for our dinner.

Now they're back in the City. They are in the area called the Grove and they have gone back to the old name, Sameem Afghan Restaurant--no more Kabob Palace.

The new location is smaller than either of the previous two. There are just a few tables. When I went in to say, "Hi," there was much hustle and bustle which, on the one hand, surprised me since it was late afternoon. But on the other hand, they have always seemed to have a healthy catering business and it made sense the kitchen would be busy with it being a Saturday.

I only got to talk briefly to Qayum, one of the owners. He told me they couldn't work out a lease on the place out in the county. I, for one, am looking forward to having them closer. 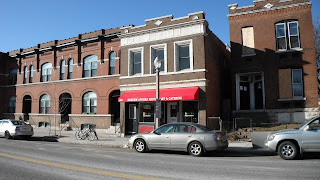 I had left the condo around 1330CST. By the time I returned at 1645CST it had warmed up to 28F/-2C. I didn't see any other bikes or scooters out and about. Pity, other than the wind it was a delightful day to ride....

If you had the right gear.
Posted by Keith - Circle Blue at 3:57 PM