Today I was out on Billie, my 2010 SYM Symba, most of the day. It was 27F when I left the house at 6:30 am. It was 26F when I returned at 5 pm. The temperature never got above 30F. All told, I spent over five hours in the seat. Now, this isn't Minnesota cold or Colorado cold, but it is cold enough. And, in addition to the ambient temperature I was actually traveling at over 50 mph for nearly twenty minutes. I seldom reach such robust speeds, but today I went over the Missouri River to visit my son, daughter-in-law, and grand-baby.

But, I started the morning with some flamingo hunting. I found this gem not far from where I live.

And, in the same yard was a gnome to go. 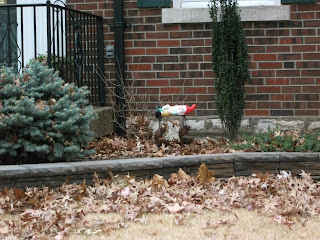 Then it was time to head for St. Charles, but before heading over the River I stopped to do some banking. My Bank has a branch inside of one of the Walmart Stores and has Sunday hours. As I expected, the parking lot was full.
But, I was driving a small motorcycle and so . . . 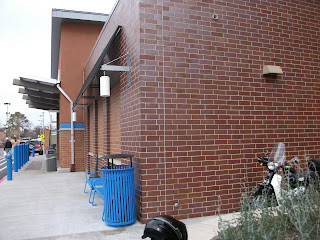 I had hassle free parking.

Then it was across the Page Ave. Extension to St. Charles to see da' kids.


As I passed the time on Billie it became quite clear that I am much better prepared for cold weather riding now than I was a year ago. Last year I looked like the Michelin Man, felt like Humpty Dumpty, and was often cold. This year I am streamlined and good to go. 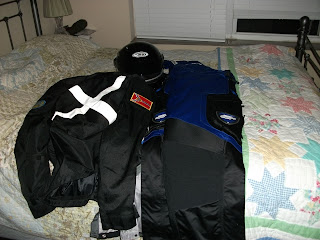 This week the forecast is for some days with the temperature in the teens during my morning commute. Let the good times roll!
Posted by Keith - Circle Blue at 8:17 PM

Email ThisBlogThis!Share to TwitterShare to FacebookShare to Pinterest
Labels: Flamingos